China’s One Belt One Road (OBOR) initiative, introduced by President Xi Jinping during his visits to Central and Southeast Asia in late 2013, has rapidly gained momentum, with its potential impact on trade and investment in Africa increasingly apparent.

Africa has long been an important market for China, with investment from Chinese companies (both private and state-owned), banks (both commercial and policy) and individuals spanning the entire continent. Moreover, the strength and depth of this broad economic and trading relationship continues to grow: the abundance of natural resources in Africa makes the continent both an excellent trading partner and an attractive investment destination for energy-hungry China with its population of 1.3 billion (and consequent need for raw materials) and excess of infrastructure development capabilities.

The One Belt One Road initiative is a transformational development strategy and framework promoted by the highest levels of the Chinese Government. OBOR focuses on connectivity and cooperation among countries along two main routes: the land-based Silk Road Economic Belt and the ocean-going Maritime Silk Road, which run through the continents of Asia, Europe and Africa.

Importantly, OBOR, and particularly the Maritime Silk Road, touches on a number of African countries in East and Southeastern Africa (such as Ethiopia, Kenya, Tanzania, Mozambique, Madagascar, South Africa), North Africa (Egypt, Morocco and Algeria), and inland African countries such as the Democratic Republic of Congo, Zambia and Zimbabwe. 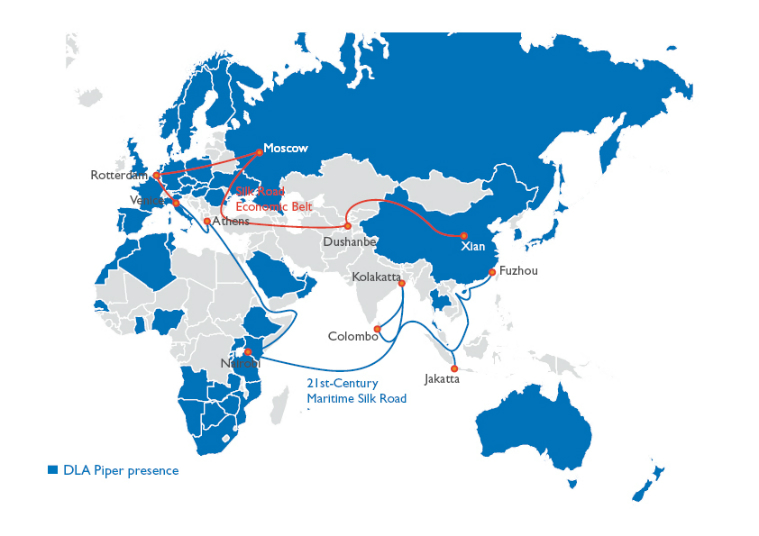 The broad strategy for the initiative is set out in its framework document, "Visions and Actions on Jointly Building Silk Road Economic Belt and 21st Century Maritime Silk Road." Issued in March 2015 by China’s National Development and Reform Commission, Ministry of Foreign Affairs and Ministry of Commerce, it states that:

"The Belt and Road Initiative aims to promote the connectivity of Asian, European and African continents and their adjacent seas, establish and strengthen partnerships among the countries along the Belt and Road, set up all-dimensional, multitiered and composite connectivity networks, and realize diversified, independent, balanced and sustainable development in these countries."

OBOR thus provides a framework for, and guidance to, China's significant and ever-growing investment into Africa. According to a 2017 McKinsey & Company report:1

"In the past two decades, China has catapulted from being a relatively small investor in the continent to becoming Africa’s largest economic partner. And since the turn of the millennium, Africa-China trade has been growing at approximately 20 percent per year. Foreign direct investment has grown even faster over the past decade, with a breakneck annual growth rate of 40 percent."

OBOR underlines China's push to take a larger role in global affairs, and its need to export capacity in industries where there is overproduction, such as steel manufacturing and infrastructure construction. At its core, OBOR demonstrates a high-level political commitment in China to work with participating countries to facilitate an increase in interconnections and trade and investment flows.

Key sectors for OBOR include:

OBOR is focused on reducing barriers to trade – both literal (such as inadequate port, rail and road infrastructure) and less tangible (such as enhancing trade liberalization and easing customs and quarantine processes). Accordingly, it calls for an improvement on infrastructure, with greater energy and power interconnections and a secure and efficient network of land, sea and air passages across key routes. Additionally, OBOR calls for greater policy coordination (such as establishing free-trade areas and improving cooperation in new technologies) and financial integration (such as carrying out multilateral financial cooperation in the form of syndicated loans and supporting foreign countries in issuing Renminbi-denominated bonds).

Today, OBOR's key institutional framework and corresponding funding bodies have been established and are operating (the Asian Investment and Infrastructure Bank (AIIB), Silk Road Fund, and BRICS New Development Bank – which also includes South Africa as a member), and Chinese corporate momentum is firmly in place behind the initiative. Relevant data supports the successful uptake of the initiative, including in a number of African jurisdictions.

Examples of projects and investments undertaken in Africa under the auspices of OBOR include:

Other projects announced in connection with OBOR include a number of private Chinese companies’ foreign expansion and joint venture plans in Africa. In this vein, McKinsey & Company's report estimates that there are more than 10,000 Chinese-owned firms operating in Africa, around 90 percent of which are privately owned.2

Opportunities for international and African companies

China's One Belt One Road initiative is intended to be two-directional: to both promote Chinese outbound investments and encourage international investment into China and along the OBOR routes. OBOR – and the funding behind it – offers the opportunity for international and African companies and institutions to work with their Chinese counterparts in developing projects along the routes. International companies may joint-venture alongside, or subcontract to, Chinese corporations seeking to implement OBOR projects. Further, Chinese firms could seek out local partners to develop projects within host countries along the routes.

Thus, when speaking with interested Chinese counterparties about OBOR projects – as compared to discussing general investment opportunities – foreign companies are likely to find a more receptive audience in China, due in part to the financing that has been specifically set up for them.

Successfully implementing projects along the OBOR routes will not be without risks and challenges. Overcoming these will require thorough due diligence exercises and robust partnership and joint venture arrangements. More importantly, success will depend on companies finding the right partners and having support networks capable of providing a thorough understanding of local conditions, regulators, market players and ways of doing business in both China and the African host jurisdictions. In order to achieve this, on-the-ground-presence and knowledge of suitable partners and relevant contacts (both for African parties in China and for Chinese parties in Africa) is a prerequisite.

Although China has allocated significant capital and resources towards implementing OBOR, it cannot implement the initiative alone. Success will depend on cooperation between Chinese companies and foreign (including African) counterparties in a raft of sectors and regions, covering everything from small-scale trade and investment to the delivery of large-scale multi-jurisdictional infrastructure.

Footnotes
1"Dance of the lions and dragons: How are Africa and China engaging, and how will the partnership evolve," McKinsey & Company (June 2017).
2McKinsey & Company, see footnote 1 above, at page 10.
Share this